As far the eye can see, nothing stands between Villa Lattuada, isolated in its green oasis, and the distant peaks of the Resegone and the Grigne mountain range.

“It is impossible to describe the elegance and attractive quality of the Villa. One’s eyes never tire of the view and sublime air of this enchanting sojourn, with its picturesque backdrop of distant mountains and nearby rolling hills that refresh and rejuvenate one’s vision” (so wrote an unknown author in Ville e Castelli d’Italia, 1907).

The origins of this distinctive and poetic place go back to the annals of  history.

Villa Lattuada is situated on the so called “Four Valleys” bluff where historic St. James Priory once rose. At the beginning of the 1500s, the Dominican Friars of Santa Maria delle Grazie in Milan built the small priory on the grounds of a pre-existing XIII century country chapel dedicated to Saint James the Apostle (mentioned in 1288 by Gottofredo da Bussero in his “Liber Notitiae Sanctorum Mediolani”). Filippo Maria Sforza, the second born son of the Duke of Milan, Francesco Sforza and Bianca Maria Visconti, helped financially its construction of the monastery with a legacy of over 200 ducats; other monies bequeathed over time, increased the property holdings.

Fra Michele Ghisleri, a Dominican prior and inquisitor general for Lombardy, often spent long periods of rest at St. James. In 1567, the year after he was elected Pope Pius V, he granted a 7 years’ indulgence to all those who visited it.

In 1652, the papal directive of Pope Innocent X decreed that the members of religious communities of fewer than 6 monks be aggregated in large houses for each Order, thus effectively suppressing small monasteries such as that of St. James. In the midst of the vicissitudes to re-establish and then suppress the priory, the Friars of Saint James continued their mission of preaching the faith and teaching the male children of Casate to read and write. In 1785, the property was put up for sale. Two noble brothers, Don Apollonio and Monseigneur Don Giulio Casati bought the monastery which was then deconsecrated and closed. This effectively put an end to its long and productive history, leaving behind the memory of a place well-loved by all.

A castle, or perchance a flight of fancy

Between 1883-1885, Giuseppe Lattuada commissioned an architect from Brescia, Antonio Tagliaferri,to design and build the extraordinary Villa Lattuada right on the “Four Valleys" bluff overlooking the distant Resegone and Grigne mountains where the ruins of the old priory stood. The villa, perhaps one of his finest buildings, is a fascinating synthesis of eclectic and romantic styles with elegant white marble embellished facades and two castellated panoramic towers. Its pinnacles, pointed gables and steeply slanting ridge roof bring to mind German castles and Gothic cathedrals, the great architect’s distinctive hallmark. Tagliaferri satisfied his taste for faithfully reconstructing a manor house as best he could, by inserting so many different Tudor-style architectural elements that, as he wrote in 1881, “one feels obliged to bow and think of queens, ladies-in-waiting and pages; the Villa evokes the same fantasies as does the reading of historic novels or the glimpse of ruined crenellated castles.”

Tagliaferri’s architecture was grandiose in style and new to the Brianza area where the tradition of building stately villas was more commonplace; however it was a style that blended perfectly into the surrounding romantic countryside. Even King Umberto I was so taken by the incomparable view and fascination of the regal villa that he chose it for his clandestine sojourns.

From afar Villa Lattuada appears suspended between earth and sky: a gleaming castle to watch over the tranquil Lombardy countryside.

The romantic air and Neo-Medieval features of Villa Lattuada, inspired by late Anglo-Saxon Gothic styles, give it, as illustrated, a character unique to the panorama of 19th century residences in the Brianza area.
Thanks to previously unseen documents, drawings and photographs found in the Tagliaferri archives, recent research has taken another look into the history of this fanciful villa and its surrounding garden. These archives are presently conserved at the Fondazione Ugo Da Como in Lonato del Garda in the province of Brescia, along with papers and images made available by the current owners of the Villa and other public and private archival institutes. This collection sheds light on the Villa’s initial project and construction stages which up to now were only summarily known, to give a more grounded interpretation of the unusual formal and expressive choices made by Antonio Tagliaferri, the renown Brescia architect.
New studies reveal that this splendid Villa was built between 1883 and 1885 upon the initiative of Cavaliere Giuseppe Lattuada, a wealthy Milanese entrepreneur in the textile industry. He wanted to build a new country manor atop the panoramic knoll known as the “Four Valleys” overlooking Casatenovo, thus extending his father’s estates, site of a more
modest villa, towards the ruins of the old Dominican priory of Saint James. Wishing to clearly consolidate the financial and social status he had attained, Lattuada, following the established usage of wealthy upper class entrepreneurs at the time, conceived his villa on a monumental scale like the opulent villas built by the Milanese aristocracy in the Brianza area where they historically settled. Antonio Tagliaferri (1835-1909), the most well-known architect in Brescia in the late 19th century, was commissioned to make Lattuada’s dreams come true. Tagliaferri had distinguished himself through numerous works haracterised by his historicist approach, open to all styles but with a certain predilection for medieval ones, and to almost all fields, ranging from restoration of monuments to new constructions, from urban development to furniture.
Tagliaferri, an exceptional draughtsman trained at Milan’s Brera Academy of Fine Arts, had always maintained a close relationship with it, first as an Honorary member then as a Councillor. He was also quite active professionally in Milan where he came in contact with Camillo Boito and all the protagonists of the architectural culture of the day. From 1887 onwards he devoted himself principally to residential buildings, starting with several major projects in the centrally located upscale area of Via Dante and Foro Bonaparte in collaboration with Giovan Battista Casati and Giuseppe Magni. Tagliaferri’s name grew in popularity thanks to his project for the Brescia Pavillon at Milan’s Italian National Industrial Exposition held in 1881. The Pavillon with its 14th century Gothic style features and romantic elements alluding to the idea of the castle, found favour with the general public and ensured Tagliaferri’s fame as an artist “enamoured of Medieval times.” These features may have influenced Giuseppe Lattuada, amongst the Exposition organisers, and his choice of a style for his new country manor that was vaguely reminiscent of castles as portrayed in the plays and literary works the wealthy upper class particularly appreciated at the time. 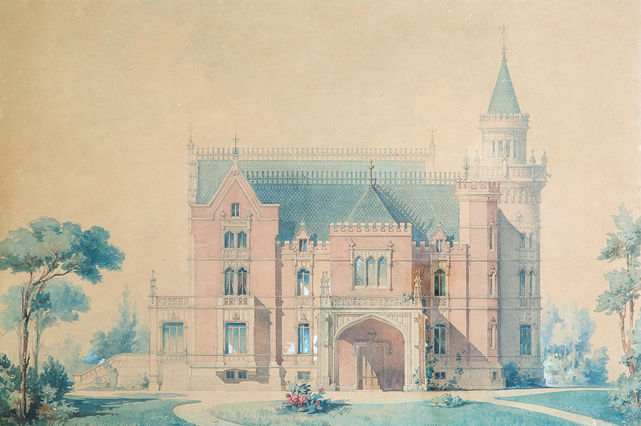 For his first professional commission in Milan, Tagliaferri, was more than pleased to fully indulge Lattuada wishes. He drew up a two-step monumental plan for Villa Lattuada reconciling its Gothic style exterior, often depicted in fine watercolour paintings and drawings, with the technical efficiency, functionality and living comfort, indispensable features of stately homes. To do so, he reinterpreted and amplified the traditional Renaissance block style villa, putting the kitchens and Villa facilities and services in the basement. On the ground floor, the reception rooms were centred around a grand floor-to-ceiling atrium illuminated from above by a wrought iron and glass skylight; the master suites and servants’ quarters were put on the first and second floors respectively.
Leading off the west entrance foyer on the ground floor were the spacious and lavish library and smoking rooms intended for the master of the house; the south entrance opened onto the dining room and adjacent pantry, whereas the reception rooms, flanked by the “winter garden” and the billiard room, opened onto the east veranda, considered to have the most panoramic view. The main staircase, moved to the left of the north entrance hall, led up to the master suites on the piano nobile and the galleries overlooking the atrium.
Tagliaferri cleverly concealed the regularity of the building’s square plan by adding bow-windows, staircases, porticos and projecting terraces to the Villa exterior. Spires, pinnacles and buttresses of varying heights were placed on its roof to give the building a strong vertical profile; the towers at either corner of the west wing and prominent crenellations, lent the Villa a castle-like air. The predominant use of Tudor arches, English-style crenellations and Botticino marble moulding crafted by Lombardi, one of Brescia’s most well-known quarries, marked the architect’s return to his repertoire of the long-established Northern Europe and British Late Gothic styles for both the Villa exterior and its furnishings which often replicated those featured in the Exposition of 1881. The overall effect, modelled after the Anglo-Saxon Tudor style in fashion in Milan
then, was achieved through the skilful employment of architectural elements typical of castles, aristocratic country manor houses and middle class “cottages.” This same style was also reflected in his design for the landscape park, with its carefully laid out English-style garden that was finished in September of 1885, the month in which the Villa was inaugurated. 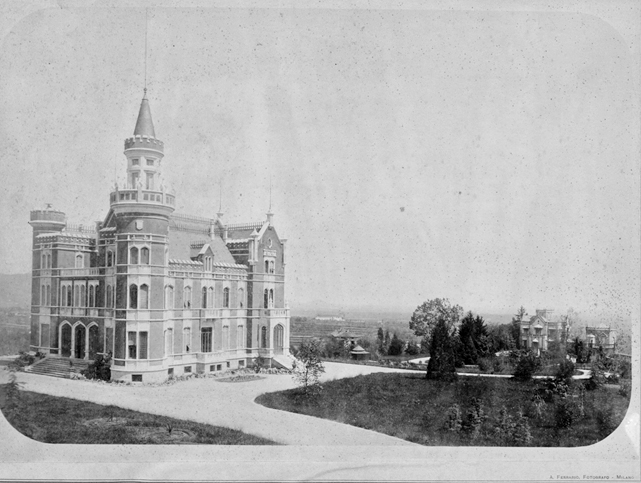 Tagliaferri’s interiors had already been subject to an initial renovation at the beginning of the 1900s. Between 1901 and approximately 1907 when the initial romantic momentum had exhausted itself, the Lattuada family itself decided to modernise the Villa rooms under the supervision of the celebrated Royal Architect, Marquis Achille Majnoni d’Intignano. Recent studies backed by correspondence and striking photos, document how he adapted the interior decor of the Villa to the 18th century Neo-Baroque style which was commonly found in the Brianza area by the late 19th century after the modernisation of the Monza Royal Palace. This may have informed the Lattuada’s choice for the decor of their Villa as they were keen to follow the fashions dictated by the Monza Palace, scarcely 15 km away. In fact, since King Umberto I and his Court spend their summers in Monza, the family probably had a close friendship with the king who was an occasional guest at Casatenovo, as attested by his signature in the Guest Book still preserved at the Villa today. 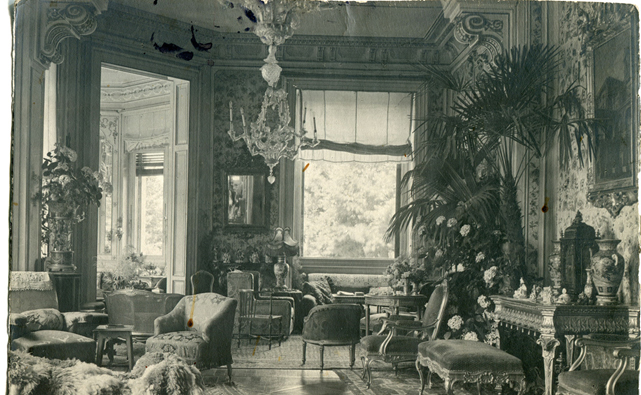 The 19th century restyling is by now lost. Subsequent changes to the Villa, even the most recent ones that transformed part of it into a reception and conference venue, have left unchanged the extraordinary expressive coherence of its original architecture and surrounding landscape park. The Villa today remains as charming as ever with its sophisticated Italian architectural features that Tagliaferri ably combined with his own repertoire of Anglo-Saxon and Northern European late-Gothic styles, harmonising them into his picturesque and fanciful late 19th century Gothic Revival Villa.

* Irene Giustina is Associate Professor of Architectural History in the Department of Civil, Environmental and Architectural Engineering and Mathematics - DICATAM at the University of Brescia. Her recent research has focused on eclectic historicist architecture and the works of Antonio Tagliaferri. The results of her new studies on Villa Lattuada are extensively described in the article, I. GIUSTINA, «Particolari Tudor su un corpo classico». Il progetto di Antonio Tagliaferri per la Villa Lattuada a Casatenovo Brianza (1882-1885), in «Arte Lombarda», 186-187, 2019, n. 2-3, pp. 155-176, whereas the architect’s activity in the Milanese context is explored in the monograph, I. GIUSTINA, Antonio Tagliaferri e l’architettura residenziale nella Milano borghese. Progetti, stili, alzati (1887-1909), CaracolEdizioni, Palermo, 2020.